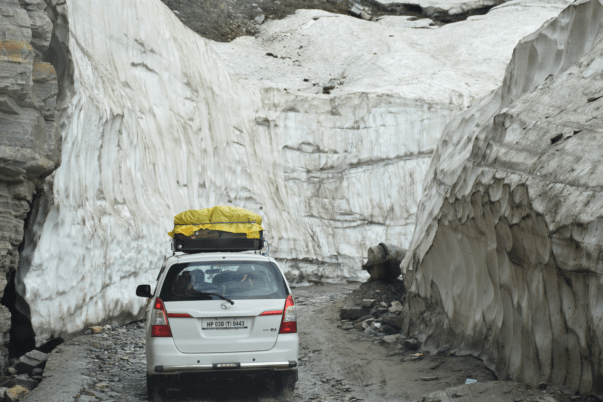 Let’s hope the good news will come soon !! Pack your Bags, Prepare your Bikes.. The Song of Himalayas is just about to start!!

Officially Rohtang Tunnel has been opened for the public. It was a long waiting project which get completed and visitors can now go to Lahaul valley crossing the Rohtang pass. It cut the distance approx. 47 kilometers and a journey of approx. 3 hours. So no more waiting for the opening of Rohtang Pass.

Despite the heavy snowfall this year Rohtang pass get opened earlier then the previous year. Today it has been opened for the local peoples & for light vehicles. Complete Leh Manali highway will also be cleared approx 1 month earlier this season. The credit goes to brave BRO team and the new snow cutter machines which are giving almost double output. Mighty weather has also favored the team.

There was heavy snowfall this year and due to western disturbance it is still snowing occasionally. Though work to open the passes has been started by the BRO. Lets hope it will be open till the starting of June.

Finally Manali Leh Highway has been opened today for this season.

This year lots of snowfall spells have occurred. It is snowing almost every week  even in the lower areas. So we are expecting a heavy snow deposit at Rohtang pass. This year still BRO have not started the snow clearance work due to the bad weather. So this season it may take longer to open Manali Leh highway.

It is the first time in History that all the passes get open in the may month. Though last year Manali leh highway was opened in may last week but then again it was get closed due to snowfall and was officially opened in June first week. But from this year not even the complete Manali leh highway but such pass and kunzum pass also get open in may month. Snow fall was very less this year and it is a warning sign of the climate change.

According to latest news BRO has almost finish the snow clearing work. From both sides they are about to meat at Rohtang Pass. In the first week it be opened for the traffic.

This year Himalaya get very less snowfall. So we are hopeful that this year Manali Leh Highway will open early. But weather is unpredictable and snowfall still can happen. BRO will start its snow clearance work from March 1. They are hopeful to open the Rohtang pass in the starting of May and leh highway upto the end of the May.

Snow on the Manali Rohtang has been cleared but due to lots of snow and risk of avalanches, Administrator didn’t allow the tourists to go up to Rohtang. Though now tourists can go upto Marhi but only after getting the permission. Click this link to Apply online Permit for Rohtang.

Srinagar Leh highway has been opened officially. But still all depends on weather as fresh snowfall can block the highway again. So always get updates before planning to go through the highway.

Rohtang Pass which connects Kullu valley to Lahaul valley is about to open in a few days if weather will favor the BRO (Border Road Organization).