Is it safe to visit Nepal and Ladakh after Earthquake?

On 25th April of year 2015, a massive Earthquake of 7.9 magnitude struck Nepal, China and Northern India of 7.9 magnitude. The Himalayas of Nepal was the epic center of Earthquake. It is the worst natural Disaster in Nepal after 1934 Earthquake.  The Overall Death toll crossed 8800 and 21000 thousands injured. Many Countries gave and still is providing Aid to Nepal.

Indian Himalayas regions like Ladakh also felt the heat. The Ladakh valley is a hot destination for travelers and adventure motorists. Every year thousands of motorbikers and bikers headed towards Leh in Ladakh for their Adventure pilgrimage. But this year is different after the recent disaster in Nepal. Foreign nationals as well as Indians all asking the same questions, seeking advice before go there.

Q. Is it safe to visit Ladakh after the recent Earthquake in Nepal?

A. Nepal Earthquake also shook the Ladakh region of J&K state of India. But it is not once in a decade incident here. Every year the region (Himalayas of India) experiences several small Earthquake. Also the Nepal Earthquake had zero effect in Ladakh and Himachal Pardesh. 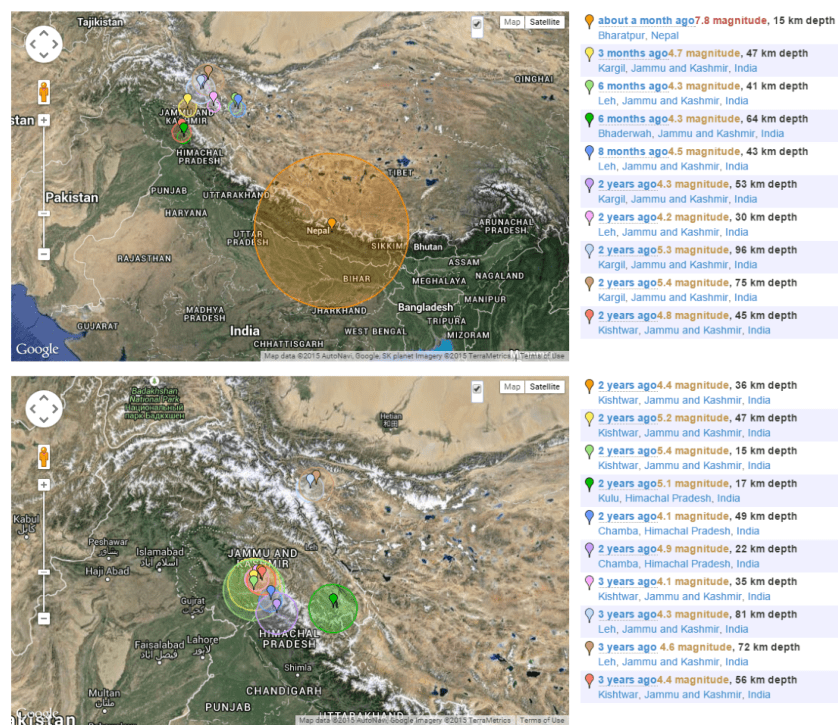 Due to many small shakedowns the region has very low pressure beneath the surface. This making it very less fragile to Earthquake disaster, However Nepal Himalayas was exactly opposite to the Ladakh,Data of Earthquaketrack.com shows that Indian Himalayas of Ladakh and Himachal Pardesh experiences 4 to 5 small Earthquake in every 2 years, whereas Himalayas in Nepal never had have experienced Earthquake after 1934 Earthquake disaster before the recent on 25th April. So pressure below there was very high and rest we all know what happened there.

Q. Is it safe to visit Nepal after Earthquake?

A. Nepal is currently troubling from the massive rehabilitation and rebuilding cost and economy collapse because of Earthquake. Currently it is not the question of how safe is Nepal’s but humane, Right now if you are planning to visit Nepal be aware that it is not a good time. Currently government and its people are busy rebuilding Nepal. Officially government requested to the foreign tourist that do not come to Nepal now, but contribute (donate) to Nepal as much you can to rebuild your favorite Himalaya trekking destination.

Nepal Earthquake claimed many thousand lives and living of 2.5 million people, so it is better to go some other destination for your holiday or India to fulfill your Himalayas adventure desire. For Nepal, Donate as much you can for Nepal and Pray for the it.