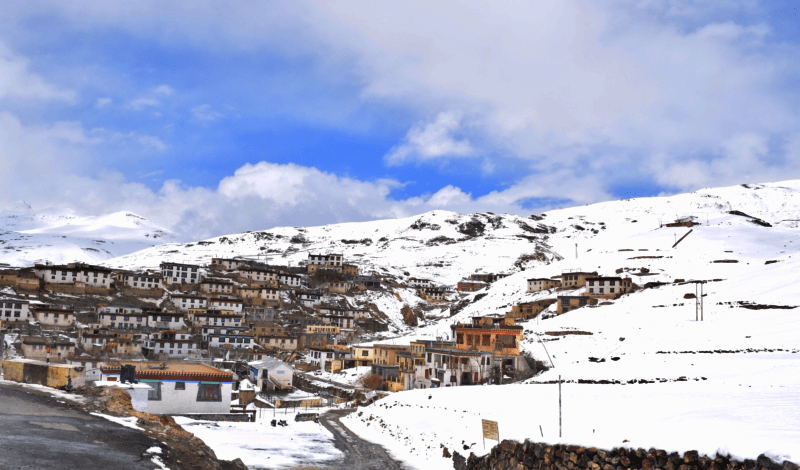 Kibber claimed to be the World’s highest village by the Spiti Administration. It is situated in a narrow valley at an towering altitude of 4270 meters (14,200ft.) in Spiti, 19 km from Kaza (district capital). It is a small village consist of 77 distinctive houses made of stone, unlike the traditional mud houses of Spiti other villages. Kibber has a new monastery founded by Serkong Rimpoche ‘ Teacher of Dalai Lama’, just above the village lies the house where he passed away in 1980s. It also has a telegraph office, a high school, a community center and a post office. It attracts thousand of tourist each year, it is also the start point of the famous Kibber – Tso Moriri Trek.

Kibber also contains a Wildlife Sanctuary, established in 1992 and has a land span of 2220 Sq. Km.

Like the other places of Spiti, Kibber also has cold and dry climate. Rainfall is almost next to zero in Kibber. The village receives heavy snow during winters. Winter in Kibber is long, from October to April with -22°C is the average winter temperature of Kibber and in night it might drop to -40 °C. Summer in Kibber village is short and comparatively warm, from May to September. 10 °C is the average temperature in summers and can fall below 0 °C in nights. Unexpected snowfall in summers can be expected. Heavy Woolens are required throughout the year.  It is advised not to go there in winters. However some tourists risk their lives in the winter to reach here.

Kibber is 19 Km from Kaza and well connected by road. The journey takes 1 hr. to reach Kibber, as road is not in good condition.  7 Km from Kaza lies the famous Ki Monastery, from here on starts the ascent of 12 Km for Kibber village. During Winter Kibber village disconnected from outer world due to heavy and frequent snowfall on the route. Many people from Kibber come down to Kaza and its surrounding area as water pipeline freezes. 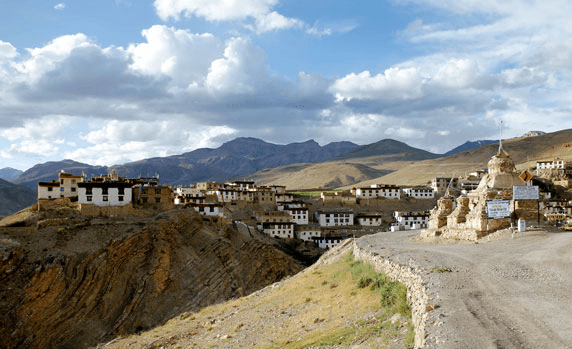 Ki or Kye Monastery – Ki Gompa was Built in 10th century on a hill, near Spiti river. It is an another stunning example of fort monastery in Spiti. Ki monastery is the biggest monastery and religious learning center in Spiti region.Presently Kye monastery is housing 100 Lamas. Ki Gompa was attacked and restored by numerous kingdoms during middle centuries. It suffered majorly during 1975 Spiti Earthquake, but restored fully with the help of Archaeology Survey of India.

Kibber Monastery – A newly built modern monastery just above the village, founded by Serkang Rimpoche.Gete & Tashigang Village – Nearly a hour walk away from Kibber lies these two amazing villages. Among the Highest inhabited villages in the world, Gete & Tashigang villages are largely remote to that of Kibber.

Kibber has few very good guest houses. All of them are quite good and cheap. All of them provide food, good clean rooms, hot water, clean & western style toilet. Norling guest house is the one look out for if you are looking for great food and alcoholic beverages in Kibber. But according to tourist reviews Toshi Zom is the best and has large rooms. It also provides Internet to the guests only, via Satellite Internet connection in Kibber. Visitors can also do tent camping on a grassy plain opposite to youth council cafe at a nominal rate charged by the cafe.

All the guesthouses stated above have restaurant. They and Youth council cafe in Kibber serves local, Tibetan and Indian food. Although Norling’s food is the best option in Kibber.There are no drinking place and liquor store in Kibber except the Norling Guest house, it serves only beer.

Each year summertime; June, July & August are the best months to visit Kibber village. Warm temperature, slightly cold – starry nights and no snow makes the life easier for tourists. All guesthouses opens only for these months as water freezes afterwards.

All our motorcycle tours to Spiti include this destination in the itinerary.