Kalpa is a beautiful, small town, situated in Himachal Pradesh. It is situated 8km above the capital of kinnaur valley Rekong Peo. The city is just beside the Sutlej valley of the Northern India, in the Indian Himalaya. The whole city is inhabited by the Kinnauri people. Also, Kalpa city is very much well known for its apple orchards. Apple is one of the important and vital cash crops of the Kalpa city. 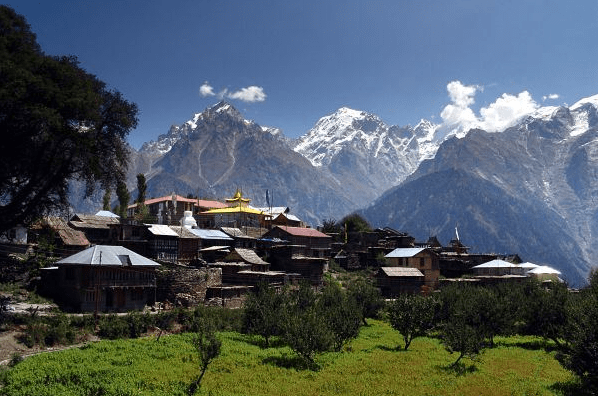 Kalpa is a historical place. The whole city is surrounded by different temples. The Sutlej river has surpassed the Kalpa city. So it has increased the freshness of this city. Moreover, the entire environment here can give uncountable joy to anyone. Also, Chilgoza forest is also there. The city is bordered by the chilgoza forest. The whole city is very much quite and the visitor can get the heavenly serenity here. Really, the overall scenery and atmosphere are just amazing. It is really hard to find such fresh environment. Visitors are actually getting such feeling from this Kalpa that they are sitting on the top of the acme. Aside of that, sacred shivling stone is visible from here too. So, tourists can enjoy the changes of te colors in a day.

Tourist can see the snow clad Kinner Kailash From Kalpa and Sacred Shivling stone which is quite visible from here. It is believed to be home of Lord Shiva “The Destroyer”. The Kinner Kailash has a great deal of religious beliefs in Hinduism.